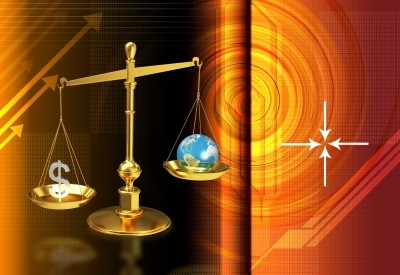 What connects guns to gum?

Genocide and graffiti are worlds apart, as are the global trade in illegal timber and nuisance parking, gangland killings and the theft of rare bird eggs, right? Wrong. They are all simply and inextricably linked by a single issue, all part of the same one-planet problem: Environmental Crime.

A Detective Inspector attached to the National Wildlife Crime Unit in Livingston, Scotland, heading up an international INTERPOL team, has pioneered coordination of a worldwide operation across 51 countries fighting illegal trade in reptiles and amphibians. Results have included the seizure of thousands of animals and products valued at over €25M. The primary target here has been eco-cybercrime, widespread and big bucks; but this scale of intercontinental sting is by no means the only level of interest and involvement at which environmental policing pays.

Crime is crime. Investigations that get results are valuable and targeting environmental transgressions can represent an effective route into a known underworld network at national, regional, even local level. Convictions won as a result of an eco-crime investigation can bring benefits to law enforcement services in more ways than one: They might take a serious criminal temporarily out of circulation, albeit on a lesser charge; and/or they might help unearth evidence in connection with a serious crime, so providing the breakthrough the police needed.

As well as pursuing high-profile cases involving illegal trade in exotic items such as ivory or tigers, INTERPOL understands that supporting the likes of the Environment Agency in its pursuit in England and Wales of prosecutions in connection with waste licensing, management, transfer and disposal offences is an effective way of disrupting the activities of organised crime syndicates. Searches on the basis of skip-hire malpractice can result in arrests and convictions of much greater significance, with wider-ranging implications.

In short, whilst The Sopranos might be fictional, the dirty-money storyline links between gangsters and garbage are not entirely false and not so far removed from real-life drama, legal prosecution cases and convictions in the courts.

Serious and organised as the ‘The Mob’ might be, they are not however at the top of the tree in terms of environmental crime.

This week, the verdict due in the trial of the former President of Liberia, Charles Taylor, could set a significant legal precedent (according to reports in The Ecologist). Taylor is being tried on 11 counts, the final one of which is ‘pillage’, or conflict-related theft, prohibited in international humanitarian law under the 1949 Geneva Convention.

Wars cost money. Many brutal conflicts have depended on arms deals funded via ill-gotten gains, exploitation of rights and illegal trade in natural resources, such as timber and ‘blood diamonds’. This violent history has lead to the environment being described as the ‘unpublicised victim of war’.

Proof of ‘pillage theory’ is difficult to obtain. Prosecutions are complex and potentially costly, with outcomes uncertain, but the principle is valid and mainstream jurisprudence is becoming increasingly interested in exploring its application.

The price to be paid for ‘stolen goods’ is perhaps set to rise to a whole new level, where the concept of ‘costing the earth’ is to be taken as a literal measure of value.

Ecocide: A Crime against Peace

A stage further and bigger still sees environmental crime taken to the United Nations. In April 2010, Barrister, environmental campaigner, aspiring law-maker and activist Polly Higgins submitted to the United Nations the written proposal for Ecocide to be made the 5th Crime Against Peace (alongside Genocide, Crimes against Humanity, Crimes of Aggression and War Crimes).

Ecocide is defined as: The extensive destruction, damage to or loss of ecosystem(s) of a given territory, whether by human agency or by other causes, to such an extent that peaceful enjoyment by the inhabitants of that territory has been severely diminished.

To highlight the campaign, a Mock Trial then took place in the UK Supreme Court, in London, which in turn lead to the sentencing of two fictional oil company CEOs, found guilty of Ecocide in relation to highly topical cases concerned with tar sands extraction.

In the land of environmental law, ‘Ecocide’ is intellectually and effectively building the bridge between the territories of human rights and crime. Crossing the boundary from fiction to fact at the UN would alter the legal landscape forever.

Environmental Crime: You, me and the dog

So, where exactly on this scale of escalating ‘biolence’ are to be found the petty eco-crimes, minor cases of community misconduct and household misdemeanours of the general public? Where does all of this leave you and me?

This is the grim reality of combating environmental crime for the majority – a relentless and relatively thankless process of cleaning-up after the actions of the minority. More grime squad, than crime squad? Wrong.

Crime is crime. Results are results. The game is the same, whether chasing leads at INTERPOL, pitching Ecocide to the UN, or fighting for a clean and healthy neighbourhood. The job is to protect: One Planet; One People.

• The INTERPOL website provides information on operations, intelligence and projects in connection with environmental crime, covering the activities of both the Wildlife and the Pollution Working Groups.

•  Ecocide is a Crime can also be found on Facebook.

• The Environmental Protection Act (EPA) 1990 sets out regulations for England & Wales covering a broad range of environmental issues, from pollution to GMOs. Of primary importance, was its original constitution making it an offence to litter.

• The Clean Neighbourhoods and Environment Act (CNEA) 2005 is the key policy document in Local Environment Quality (LEQ) regulations, providing more effective powers and tools, under which provision, for example, Local Authority enforcement officers are able to issue fixed penalty notices. It updates and extends an number of the legislative elements of the EPA above.

• The Antisocial Behaviour Act 2003 deals with (among other things) fly tipping, littering, graffiti, and fly posting.

• The Government in England and Wales works closely with the independent charity Keep Britain Tidy (KBT) to develop advice, research, support and training, plus deliver behaviour changing campaigns on LEQ matters, including the Love Where You Live campaign. KBT resources and outputs of note include Knowledge Banks, Surveys and Reports – particularly the landmark Local Environment Quality Survey England – plus special projects such as the Eco Schools initiative, the Green Flag awards scheme for parks and the Blue Flag programme for beaches.

• The Government-lead Chewing Gum Action Group (CGAG) works closely with industry and Local Authorities to reduce the amount of gum litter on streets of the UK.

• For concerned individuals living and working in England & Wales, there is also additional information available online regarding street cleaning, litter and illegal dumping matters, offering help and advice on what can be done about LEQ issues.